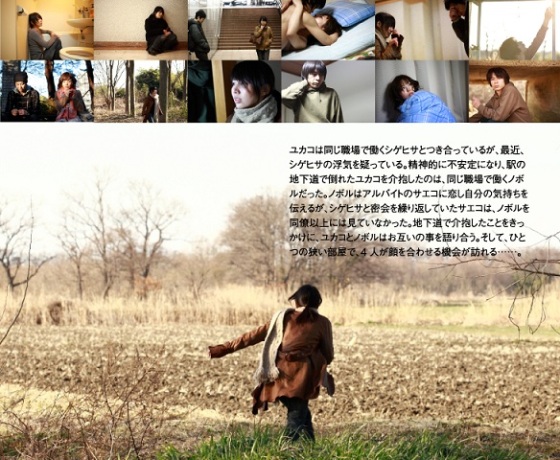 I understand that many times a title must be translated with some freedom to get a proper appreciation of a meaning when it refers to a distant culture. But sometimes they take their liberties to an extreme, as in this case: ふゆの獣 (Winter beasts), when translated into English, surprisingly becomes Love addiction! Actually, the latter title shows the theme more accurately, although it loses the metaphoric flavor of the original one.

In a format close to a documentary and with touches of expressionism through movements of the camera and games with the images, we are shown different interrelated stories among 4 young characters, always in pairs like all possible permutations in a maths problem. They pass through fragile moments in their relationships and experience a bunch of universal feelings like love, fear, passion, dependency (addiction), vulnerability, spite, hatred…

Every sadist needs a masochist and Yukako plays that role: she is attractive and intelligent but her emotional attachment to Shigehisa makes her distort reality, as a child who thinks that negating the facts will prevent them from occurring. Shigehisa, on the other side, attractive for his strong character and contemptuous attitude, negates in front of others and justifies his actions through his own egotism. Younger colleagues Noboru and Saeko can’t avoid admiring their senior and falling for him, although for Noboru –a stereotypical character in this film’s Freudian closed world- that will be more difficult to accept.

The movie’s timeline is wisely made, starting from a critical moment at an accidental and moving encounter in the subway with interrupting flashbacks that clarify events. And the long final sequence, the proper “shuraba” with the 4 characters in a claustrophobic 6-tatami-wide room leads the plot to a final and unexpected climax.

Infidelity and the emotions that it entails happen in all cultures, many times in similar ways, although the means to deal with them are different. There is the violent reaction of the male-dominated world; the legal action and the consequent divorce; and the friendly discussion –Tanizaki Junichiro style– to look for ways to solve a deeper problem. Men and women’s views as for cheating are different, the same way their approach to sex –whether marital or not- is not the same. Although cheating is not just about sex. It’s also about novelty, curiosity and play. Collateral feelings and states of mind like low self-esteem, negation and desire for revenge also come together in the pack and affect both the cheater and the cheated one.

This unpretentious movie by director and scriptwriter Nobuteru Uchida masterly shows a compendium of all those feelings and reactions, and constitutes a simple encyclopedia of the cheating and its psychological implications in the present young Japanese society. 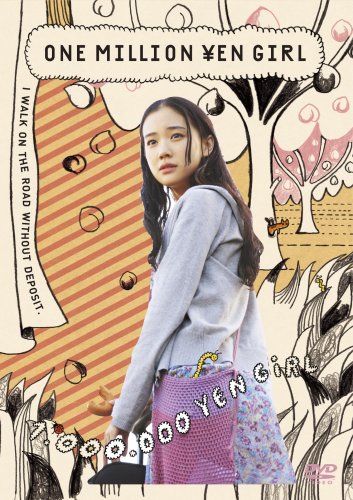 Roughly, there are two types of people in the world, the ones who seek stability and the ones who run away from her. Usually technological progress and civilization go along with the former attachment to the land, but when it comes to a romantic idea of life, both change and adventure don’t have any match. We have for example cowboys versus farmers, gauchos versus XIX century urbanites, conquistadors and bandeirantes versus accommodated landlords, adventurers of any kind versus salaried workers. In modern literature some venturesome authors and travel writers became their own works’ subjects, too: Lord Byron, Jack Kerouak, Bruce Chatwin, Javier Reverte. But there are also plenty of them who never abandoned the security of their studios, many times extolling the feats of the omnipresent civil servant: Franz Kafka, José Saramago, Jorge Luis Borges, Juan José Millás…

百万円と苦虫女 Hyakumanen to Nigamushi Onna (One million yen and the woman with a sour face), a Bildungsroman in the form of a film, seems to deify the commented adventurous category. The main character’s bohemian attitude displays an on-the-road credible youngster a la japonaise –vade retro, “cool” and pretentious Murakami-, a young woman who grows and learns from experiences. However, at the same time the nomadic lifestyle keeps her forever young (like Alphaville’s classic) and prevents her from entering the adults’ world of responsibilities. As soon as work, economic and/or emotional attachments are developed, it’s time for her to go and search for a new place to make a living. That way she can escape the miseries she thinks she is fatefully carrying; an always convincing Aoi Yuu doesn’t seem to realize that what she considers a curse is actually plain adulthood.

Her everlasting plans for freedom pass through some moments of loneliness and crisis but always a deus ex machina intervention channels back events into her initial scheme. The idea of saving one million yen (百万円 Hyakumanen) and departing is a good one, apart from making a great title. They could have chosen one month, or one year, or something more subjective or twisted, but the money savings account creates the perfect tension in the story and shows occurrences in a more haphazard fashion.

Reader’s Response Criticism is a school of literary theory -applicable to books, films, and other forms of art- that focuses on the reader (watcher) and the way s/he is affected by the content of the book or film. Above all, it analyzes turning points in the story that make the reader (watcher) reflect and realize facts beyond appearance. In this movie there are quite a few examples of these situations, especially when depicting people’s humanity: there is the 気持ち悪いおじさん disgusting middle age man, who changes from a stalker into a protective and good-hearted human being; the apparently inoffensive and friendly 地元社会 countryside community, that becomes an aggressive mob in the line of Dogma’s Dogville; or the dedicated young gardener who becomes a womanizer who becomes a passionate amour fou victim.

And the film is rounded off with a game of encounters in the railways stairs, one of my favourite scenes –along with the one in the bathtub, Suzuko’s eyes wideopen as a cat’s-, a metaphor of real life destiny as a confluence of chaotic, unpredictable and uncontrollable factors. But, as she pleasantly says in the end, “じゃあ、来るわけないか”. And the show must go on.