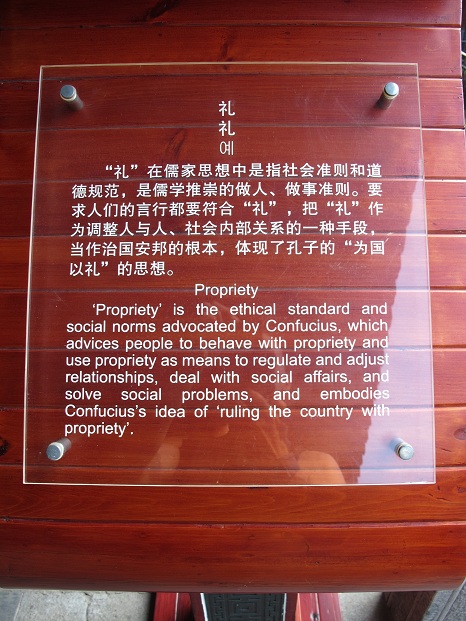 China is, no doubt, a country of contrasts, one more mark of most developing countries in the world. You have the relatively rich coast and the poor countryside. But even in wealthy Shanghai and Beijing, you find poverty on the streets. They passed from a tightly controlled economy to an open market and frantic business after Deng XiaoPing. And now, everyone wants to be rich, everyone wants to live Western style. But they are too many, and the competition is hard. After Mao and the Cultural Revolution, intellectuals and good manners were equal to bourgeois vices, and everyone rushed for survival without paying attention to that. Nowadays, that the standard of living is gradually going up, their ways have not paired the economic development yet, and then you find people spiting on the floor in front of you, not respecting lines or pushing around, hotel clerks and taxi drivers quite rude and so on. But at the same time, a new generation of young Chinese not so limited by censorship –although it still exists, especially on the Internet, they might not be able to read these lines-and indoctrination, get little by little to adapt themselves to a more global and friendly world. I met so many families and young students willing to exchange pieces of language and culture with a foreign traveler…The hatred-love relation with the West and the complex of inferiority should be replace by one of a more mutual respect and help. And maybe they should look back to their ancient culture’s precepts of ethical standards and social norms advocated by Confucius.
As for politics and democracy, as long as people see how their standard of living goes up, they don’t care too much about it. But if the economy happens to get stuck one day, the Government will be in real trouble. Traveling around China and feeling the hugeness of the country in terms of population and territory, I understand the desire of the Communist Party of having everything tied up. If they didn’t, China would probably fall into chaos and/or regional civil wars. Now it’s a non-free but at least somehow harmonious society, and with low delinquency. But they will have to open the system; it’s a matter of time.
I think China has a real problem with pollution and should take strong measures to control it. Cities are not only sky-scrapers, factories and cars, but also people on the streets who have the right to breathe fresh air. The EXPO 2010’s theme is precisely the green cities. It’s a good and brave start, being aware of their own problems, but now they have to really face them, maybe at the cost of their own high-speed economic development. At least most scooters are electric. They should do the same with cars, if their objective is that everyone own one; and control their factories’ Co2 emissions.
As for China’s cities, the more livable and “civilized” is Beijing, followed by frantic Shanghai with its many contradictions –Pudong and the Bund vs. the slums downtown-. Mid-size cities like Nanjing can be nice in some areas, hostile in others; same as for Qingdao –good city to meet Chinese national tourists from all around China-, with a relatively well-taken care of beach front but a more abandoned downtown.
After this 2-week-trip to China, I don’t think I’ll go back in the short or medium term, but when I do, I hope I will find a better place to live.
Here you are a few videos. Enjoy:
Qingdao beach
Nanjing Kung Fu Noodles
Chinese exotic food
EXPO 2010 China’s pavilion
Traditional music at Shanghai’s Yuu Gardens
Shanghai’s storytelling
Miguelín, the Spanish gigantic baby at EXPO Shanghai 2010
Spain’s pavilion at EXPO Shanghai 2010