Local nationalism and nonsense in Osaka with Princess Toyotomi 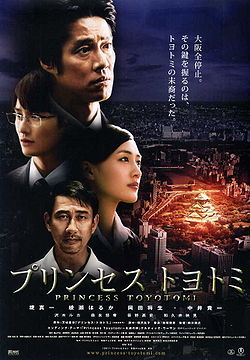 No doubt historical science fiction is now popular in Japan. Last year, Ohaku depicted a woman-controlled Edo Japan due to an epidemic that decimates the male population. Men had become just as valuable as a male bee in a beehive. In the case of Princess Toyotomi, a time-bridge is open between the 17th century and the present day, and the last descendant of the Toyotomi family from Osaka who manages to escape from a bloodshed by Edo’s army happens to be a 14-year-old girl who lives as a normal middle-schooler in nowadays’ Osaka.

This apparent feminism a la japonaise is just a mirage, because both films, and especially this last one, actually show a men’s world and depict women as weak human beings willing to be protected by a paternalistic and hierarchical society. In Princess Toyotomi the absurdity of the three official accounting auditors from Tokyo acting like cool secret agents is rounded off by the only woman in the pack’s naïveté, bordering cute stupidity.

And if we add the nonsense of a hidden passage that takes to a Masonic-like Osaka Parliament and an actual Osaka prime minister who at the same time works at an okonomiyakiyasan (cheap Osaka restaurant specialized in Japanese-style pizza omelets), the nonsense reaches its zenith.

At least, on the way to the end we are given a tour of the Kansai capital, its streets, its commercial districts, its typical food, Namba, Umeda, Osaka’s castle and of course, the omnipresent Osaka’s obaachan, who are stereotypically reputed for being the noisiest and most frivolous beings in Japan. Ah, and I had forgotten the cross-dressing, so beloved by the Japanese, incarnated in a male teenager who insists on attending school wearing a girl’s uniform and is bullied by his yakuza-to-be classmates (for venues in Kyoto try Metro and one of its Rafflessia’s parties) .

This movie owes much to Alejandro Amenabar’s Abre los ojos, with those scenes of the city completely deserted and the characters drifting around in search of an explanation; and also to the old chivalry books (I guess Japan has many of their own) and the hero’s anagnorisis, representing an innate quality in the individual –usually a lost baby prince-, who even if raised by a commoner’s family, would be showing off his character’s nobility and would eventually be recognized as prince or king (in this case, princess).

As for the actors, Tsutsumi Shinichi can’t avoid his usual and congenital histrionics –take a look at Always-, and the young Okada Masaki and Ayase Haruka could well have remained as teenage magazine idols because acting is not for them. Only Nakai Kiichi, even in the schizophrenic role that has been punished with, shows some art.

To end this diatribe against the insult to the audience’s intelligence and good taste that this commercially successful movie represents, just a comment about its ideology: the apology to the difference and the cult to past glories contained in it is just an example of a ridiculous and local nationalism promoting tension among people even from the same country.

Though I spent a good time at the cinema.