Hankyu Densha: an universe of struggling women on a Kansai railway 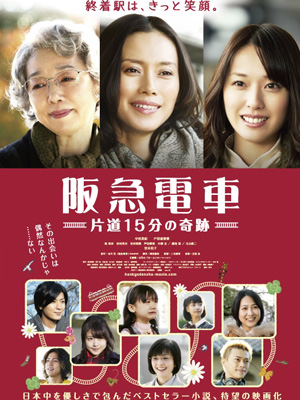 Hankyu Densha, based on the homonymous novel by Hiro Arikawa, is a story about solitude, about deceived characters themselves who can’t find a way out of their problems but struggle to get rid of them. Paradoxically, an old and crowded Japanese train marching from Takarazuka to Nishinomiya Kitaguchi station is the setting for the intertwining solitary lives of a thirty-something bride-to-be, just abandoned by her boyfriend; of a school girl who suffers from isolation and incessant bullying by her classmates; of an obaachan (granma) who lives on remembrances from immemorial times; of a college student, victim of her boyfriend’s choleric fits of rage and jealousy; of a pusillanimous housewife trapped in a world of hypocrisy and sense of obligation; of two “otaku” Kwansei Gakuin students completely out of the fashionable and intolerant trend of the Japanese youth’s clothes and sheepish behavior; and of a high-school girl who sees her longed-for dream vanishing and feels guilty.

They all have things in common: they feel lonely, deluded and betrayed. Maybe the most stunning character is the one played by the once-awarded and many times nominated to best actress by the Japanese Academy Miki Nakatani, whose boyfriend justifies his leaving her for another woman –her 後輩！ (her more junior colleague)- because she is strong enough to take care of herself but the new (and pregnant) one really needs him; although revenge is best served cold and she forgives them on the condition that she is invited to the wedding.

But this is also a story of solidarity, about people who see themselves in another person’s sufferings. It’s what we call empathy, that concept so well explained by modern neuroscientists through the construct of “mirror neurons”.
Those who are not capable of experiencing empathy are either stupid, or autistic or pathologically selfish and egomaniac.

The characters, one after the other, advice and interfere positively in one another’s lives. And through this process, each of them becomes aware of their own issues.

The message is clear at the end of the movie: as Shoko claims, “世界でいい部分もある”, in the world there are also good things. Let’s go and take them, no worries about impossible dreams and social conventions.