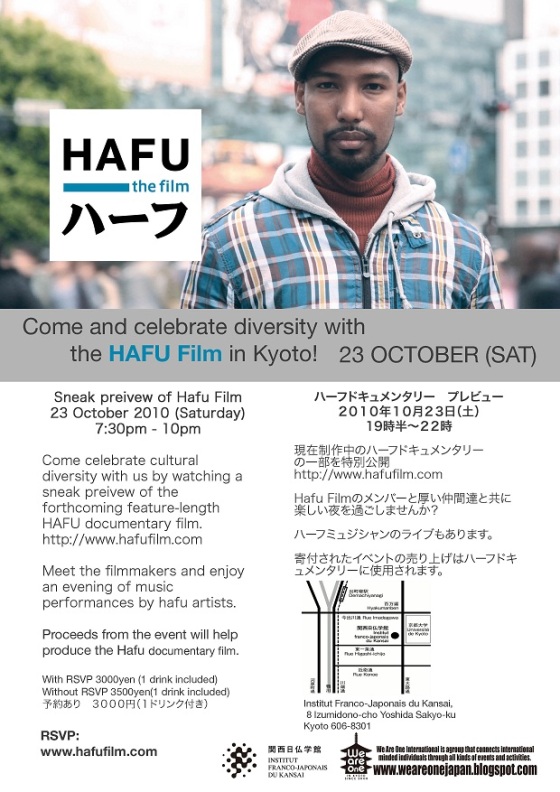 ハーフ Hafu project was born in London and started as a photo exhibition of faces from people with different “bloods”. I remember when a couple of years ago they arrived in Japan, where one in thirty births are from parents one of them not being Japanese (in Tokyo International marriages are now one in ten). The photographic project ended up like a film project in the hands of young directors Lara Perez Takagi and Megumi Nishikura, both half Japanese, too. In June they were portrayed on an article at The Japan Times as an emerging community.

Last night, at the Institut Franco-Japonais du Kansai , there was a preview of the amount of footage they have filmed so far, along with music and a nice talk with a friendly crowd from and not from Kansai. The mini-film-documentary depicts different cases of half-Japanese and their stories of adaptation to Japanese society with more or less success: we have David, mother from Ghana and Japanese father, who was raised in an orphanage in Japan and considers this country as his actual home. At some point in his life, he decided to know his African roots, went back to Ghana and started building schools for poor children there raising funds in Japan.

There is also a relatively affluent family in Nagoya with a Mexican mother, Japanese father and 2 kids, the older one being bullied at school and too quickly diagnosed by his teachers as slow. In many cases of children raised with different languages there is this problem of keeping up with the other kids at school –at early stages there is some confusion as for languages and it has also being proved in neuro-psychological experiments that multilingual people are slightly slower at selecting vocabulary because they have more options from where to choose when speaking or writing-. If you add that to the emotional stress of being bullied, in many cases those kids drop school before even finishing high-school. These two parents have decided to send him instead to an International School in Nagoya, where he will have more possibilities of success. –But not all parents have the economic resources to send their kids to an International school –I tell my co-worker and friend Andrew, who had just strategically sat next to a beautiful half-Japanese young woman. –Yeap -he quickly replies- but those kids will never go back to the Japanese society. Once you enter an International School, there is no way back.
I think about his statement and agree with him, although maybe it’s not a bad thing to be on the edge and take advantage of the part of the society you like and at the same time have access to an International one until Japan becomes more plural and global.

This Hafu project promotes this kind of discussions, and talks about identity, hybridity and so on.
Good luck to the Hafu team.

P.D.: By the way, they are still recruiting characters for the movie. They need a half-Japanese person who looks completely Japanese from the outside but has been raised among two or more cultures.