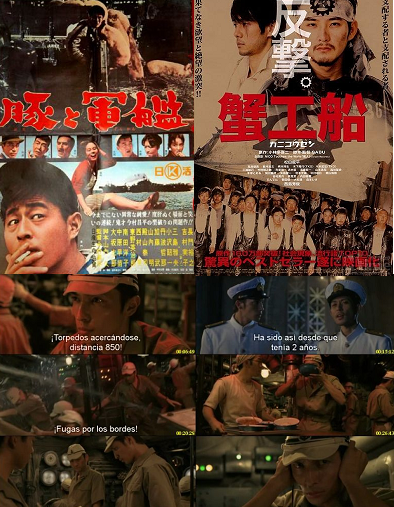 In the past one of the most militaristic societies, a nation of warriors led by bushido for centuries and an aggressive Asian colonial power at the beginning of the XX century, Japan can be considered today a peaceful and non-belligerent society, at least in theory. The dealings about the Futenma base in Okinawa with their American allies and their nuclear-umbrella protection, as well as the realistic development of a euphemistically-called “self defense forces” army contrast with a population raised in the idea of peace and the evil of war.

Having suffered the bombing of their main cities and the total annihilation of 2 of them by those same allies, the new generations have chosen to forget or at least to deceive the pain and keep it tucked away in their hearts to be able to continue life. The characters in Shohei Imamura’s film 豚と軍艦 Pigs and Battlefield (1961) live in a post-war Yokosuka (small port south of Yokohama), “occupied” by the marines, whom they despise; but they need them for a living and eventually the loathing becomes admiration. The film sourly shows a defeated country with a wounded national economy and a city-port transformed into a brothel for US GIs, degradation common to other Asian cities in previous years. In the void-of-power but booming new economic society trying to do business with the winner of the War, yakuza Japanese gangsters struggle for those opportunities of making fast and easy money, the same way young Japanese girls feel attracted by a life of affluent parties, nice dresses, alcohol and music on board of the American warships.

Only a few years before, the Japanese submarines were fighting against American destroyers in the Pacific, a decisive battlefield in WWII. The more recent film 真夏のオリオン Last Operations Under The Orion (2009) shows a balance between patriotic self-sacrifice and antimilitarism. Its disapproval of the use of 回天 kaiten submarine kamikazes, manned torpedoes against the American battleships, is represented by the young Japanese captain’s refusal to use them, demanding a fair fight. And the Americans –who also entered the production of the film-, are depicted as a relentless but humanized enemy. The end of the war will be taken by the Japanese crew as a relief and the beginning of the reconciliation.

Back in time but also recent in film is 蟹工船 Kanikosen (2009), a remake of a 1953 film and based on the homonymous proletariat novella written by Takiji Kobayashi in 1929 –by coincidence translated into Spanish by my sempai Jordi Juste-, which to a bolder antimilitarism adds the denounce of social injustice. We are now in 1904 at the time of the Russo-Japanese War, and a Japanese factory-boat sails in Kamchatka’s waters to fish and process crab meat. Young actor Ryuhei Matsuda –much more virile than in his also memorable performance at 御法度 Gohatto (1999)- stands as the spontaneous leader of the uprising on board. The connivance between the military and the private company owning the factory-boat for the sake of profit and an ulterior bribe clearly relates to the exploitation suffered by the young and illiterate overworking crew. In the film, 2 workers get lost in a small boat in the sea but they are saved by the Russian “enemy”, a merchant ship whose seamen teach them a more humanized and democratic relationship between employers and employees. The awareness of their own oppression will trigger the rebellion back on their boat, with fatal but unavoidable consequences.

The 3 movies have their own love stories too: in Orion, the captain’s girlfriend –indeed his best friend’s sister- has pledged to wait for him no matter what. And he goes back, but not the brother, who dies at the bottom of the ocean after a more than implausible conversation in Morse with his friend and brother-in-law. In Kanikosen, stories of childhood girlfriends are mixed with the desire to belong to a happy and wealthy family full of harmony, the dream of the underclass, a Kimura family idyllically represented by cheerfully playing ball in white suits and hats in an Edenic garden. In Pigs and Battlefields, the young, beautiful and strong-willed Haruko is young chinpira Kinta’s motivation to improve. He dreams of becoming a big yakuza boss and looks with contempt the factory work that he is constantly offered by his girl-friend; the smuggling of pigs represents a dirtier but much more profitable activity, but to what price?

These are films that reveal a fictitious but more or less historical panorama of Japan, not so distant in time but far in quality life and freedom compared to these days. They are also an ideological lesson about what could happen again in the event of the rising of the military and/or the break of another big war.