Chekhov and a histrionic bear at Centro Ruso 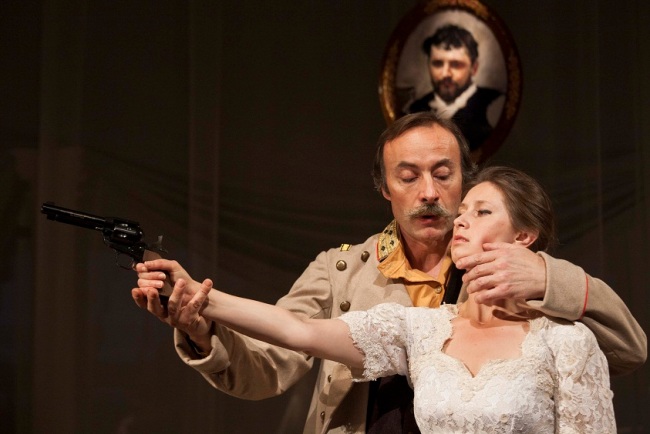 Even Anton Pavlovich Chekhov’s ‘minor’ plays entertain us and create a place for reflection, in the case of The Bear, around the themes of mourning and gender roles in love. Popova is a young widow who shuts herself away inside her house and reaffirms her intention of remaining ‘dead’ at home for the rest of her life after her husband’s death; seven months have passed and she dreams of military parades with handsome officers courting her. A creditor’s sudden arrival agitates the widow in unexpected and contradictory ways. Smirnov, played at Centro Ruso by a brilliantly histrionic  Germán Estebas from Teatro de Cámara Chejóv, is a rough experienced man, desperate for collecting what he is owed, but he suffers a not so unexpected metamorphoses: from a ‘bear’ (I guess you need to know Russian culture to take it as an insult) to a gallant suitor. The comical scenes implicitly give way to contesting society about mourning widows’ hypocritical old costumes (there are exceptions in literature, of course: Hamlet’s mother only waited one month to marry her brother-in-law), acting against their real desires; very praiseworthy, by the way, Elena Nikonorova-Petrova’s performance in Spanish and her showing of the character’s dissonance of words, acts and thoughts. The superb dialectic discussion between both characters, part of which I reproduce afterwards from Project Gutenberg, leads ‘misogyny’ to encounter a strong Russian ‘poetic creature’ and to become her slave, always in the context of a ‘chivalric’ romantic love structure.

SMIRNOV. [Teasing her] Silly and rude! I don’t know how to behave before women! Madam, in my time I’ve seen more women than you’ve seen sparrows! Three times I’ve fought duels on account of women. I’ve refused twelve women, and nine have refused me! Yes! There was a time when I played the fool, scented myself, used honeyed words, wore jewellery, made beautiful bows. I used to love, to suffer, to sigh at the moon, to get sour, to thaw, to freeze…. I used to love passionately, madly, every blessed way, devil take me; I used to chatter like a magpie about emancipation, and wasted half my wealth on tender feelings, but now—you must excuse me! You won’t get round me like that now! I’ve had enough! Black eyes, passionate eyes, ruby lips, dimpled cheeks, the moon, whispers, timid breathing—I wouldn’t give a brass farthing for the lot, madam! Present company always excepted, all women, great or little, are insincere, crooked, backbiters, envious, liars to the marrow of their bones, vain, trivial, merciless, unreasonable, and, as far as this is concerned [taps his forehead] excuse my outspokenness, a sparrow can give ten points to any philosopher in petticoats you like to name! You look at one of these poetic creatures: all muslin, an ethereal demi-goddess, you have a million transports of joy, and you look into her soul—and see a common crocodile! [He grips the back of a chair; the chair creaks and breaks] But the most disgusting thing of all is that this crocodile for some reason or other imagines that its chef d’oeuvre, its privilege and monopoly, is its tender feelings. Why, confound it, hang me on that nail feet upwards, if you like, but have you met a woman who can love anybody except a lapdog? When she’s in love, can she do anything but snivel and slobber? While a man is suffering and making sacrifices all her love expresses itself in her playing about with her scarf, and trying to hook him more firmly by the nose. You have the misfortune to be a woman, you know from yourself what is the nature of woman. Tell me truthfully, have you ever seen a woman who was sincere, faithful, and constant? You haven’t! Only freaks and old women are faithful and constant! You’ll meet a cat with a horn or a white woodcock sooner than a constant woman!

POPOVA. Then, according to you, who is faithful and constant in love? Is it the man?

POPOVA. The man! [Laughs bitterly] Men are faithful and constant in love! What an idea! [With heat] What right have you to talk like that? Men are faithful and constant! Since we are talking about it, I’ll tell you that of all the men I knew and know, the best was my late husband…. I loved him passionately with all my being, as only a young and imaginative woman can love, I gave him my youth, my happiness, my life, my fortune, I breathed in him, I worshipped him as if I were a heathen, and… and what then? This best of men shamelessly deceived me at every step! After his death I found in his desk a whole drawerful of love-letters, and when he was alive—it’s an awful thing to remember!—he used to leave me alone for weeks at a time, and make love to other women and betray me before my very eyes; he wasted my money, and made fun of my feelings…. And, in spite of all that, I loved him and was true to him. And not only that, but, now that he is dead, I am still true and constant to his memory. I have shut myself for ever within these four walls, and will wear these weeds to the very end…. 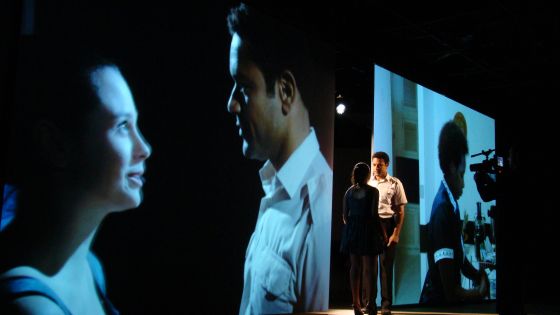 As in a mirror house and playing with the audience’s senses, Brazilian theater company Vértice de Teatro mixes video and stage, characters and actors. Two sliding screens and a hand video camera depicts and interfere with the story jumping from one diegetic level to another, from video to performance, from Strindberg’s story rewritten for nowadays’ Brazil to the refusal of actors to keep on playing repulsive but cathartic roles for themselves. There are constant interferences of the camera on the stage, and actors saying – [Cut!] or addressing the audience in Spanish and making fun of themselves or crying. And behind all the technical apparatus and the dilemma of which of the video scenes were recorded and which ones were live, we find the racial issue, the story of the white rich girl infatuated with a black servant and perpetuating centuries of bondage, a connection à la brésilienne with the original story by the Swedish playwright, but with an improvised ending.