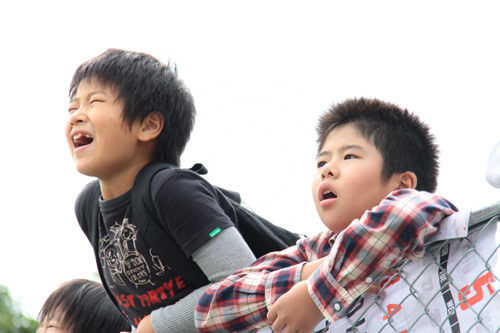 「家族より音楽と世界を選んだ」“Before family I chose music and life”, a young divorced Japanese father tells his eldest son Koichi on the phone when the latter begs him to come back home. Each brother –they are also related in real life, Koki and Oshiro Maeda- lives with a different parent hundreds of miles away from each other, but somehow they struggle to keep their family-status relationship through constant telephone calls. Both have different personalities that seem to fit their respective custodian: Koichi, 12, lives with his mother and grandparents in Kagoshima and is mature, self-contained and laconic; Ryunosuke, in Fukuoka, 2 years his junior, is like the father, expansive, carefree and full of life.

Director and scriptwriter Hirokazu Koreda, a XXI century’s brilliant eyewitness of the traditional Japanese family’s disintegration, already shocked worldwide audiences in 2004 with a painful story of children abandonment, 誰も知らない Nobody knows, and only 2 years ago explained to us the role of Japanese women in society, with the allegorical 空気人形 Air doll. This time, in 奇跡 Kiseki (Miracle), without the gruesome details of his previous films, reflects mildly but consistently about both worlds of adults’ and children’s, their similarities, differences and their interrelations.

One of the many things that startles Westerners who start a life in Japan -I haven’t got used to it myself yet, even after 5 years- is the way mothers talk to their kids, simulating they are children themselves too, and creating an atmosphere of naïveté with quite strange results, which seem to promote more childish behavior in a spiral of mutual stupidity. I remember dating a few years ago a Japanese woman in her late twenties who used to talk to me that way too, maybe condescending my lack of Japanese proficiency or simply deducing that my condition of foreigner made me a child, unable to understand basic situations or implicit social rules; maybe she just wanted to look 優しい affectionate. The fact is that even at the time my Japanese was good enough to understand and notice her tone and always made me feel like an idiot, especially with people around. I wonder if Japanese kids feel the same way.

Related to this, I happen to be reading a book about Tanizaki Junichiro by American feminist scholar Margherita Long and she cites Tomiko Yoda, who confronts “claims that Japanese society promotes cozy mother-child dynamics such as intimacy, indulgence, and protection with claims that the same dynamics make Japanese society infantile, suffocating and pathological”. I also think that a society that promotes childish behavior even in teenagers fails to understand how mature and able to understand complex matters a 10 or 12-year old person can be, as the movie shows. In Kiseki, children’s behavior and conversations –even the superstitious thinking about the occurrence of miracles and coincidences- is not that far from the adults’. Male characters, the father, the teacher and the grandfather, seem to understand that and promote in the children independence and maturity, while the mother keeps on playing the game of having a 12-year-old baby at home.

My friend Luisa, Japanese-Brazilian third generation herself, came to Japan at 18 and now she has 2 kids of around Koichi and Ryunosuke’s age. She used to tell me how different Japanese children are compared to Brazilian ones due to the different upbringing, how her kids are completely naïve while the ones overseas are witty and resourceful; but she is fine with that: “children must be children, they don’t need to know too early about the bad things of life”. I disagree with her: the sooner they know about life, the less traumatic it will be later when they fully become part of society. It’s not necessary, though, to reach extremes like the dreadful lives of explored children from movies I’ve recently seen –Anjos do sol (Brazil), Holly (Cambodia)-, both from 2006, good films but not recommended for too sensitive people.

Sometimes the pattern is the opposite. In some cases, especially in Japan, with age there is a regression in terms of responsibility and maturity, like for example, when at the university. All the pressure is just to enter, to pass the entrance exams; once you are inside, you can go back to your good old days, dust your childhood and forget about life duties. And if you are lucky enough to enter a prestigious private university from elementary or middle school, then you can afford to play the child longer. A college student about to graduate told me the other day when having lunch together on campus: “The last time I studied hard, I was 10!”. I just couldn’t believe it.

Another interesting point in the movie is the clash of lifestyles and values between a traditional Japanese society based on a hierarchical family with tight and well-defined ways, roles and duties, and a more modern free-thinking one based on individuality and personal development; the former secures conventional values and social harmony, the latter aspires to happiness. And the young characters here, in spite of the respect they feel for their elders, seem to be willing to follow the second path.

The success of this movie is based on the fact that, far from an easy happy ending, it chooses to face up to actual life accepting reality the way it is and teaching us to cope with that. After all, having divorced parents is not such a bad thing if we are properly taught to deal with it. And everybody has the right to choose music and life.