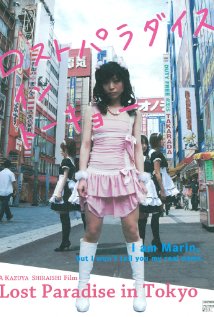 The post- Meiji Restoration author Nagai Kafu (1879-1959) used to say that the women in the lower classes –sometimes even “indecent woman” like geishas, bar waitresses and prostitutes- had a better heart than those of the middle class. Well, the main female character at Lost Paradise in Tokyo seems to completely prove his assertion. Former オーエル office lady (Satoko Nishimura), mediocre idol consoling mediocre サラリーマン salary man (Fara) and call-girl by night (Marin); three names for the 3 faces of this complex character who becomes emotionally attached to a 2-member family (Mikio and Saneo) when she is hired to release the autistic elder brother’s sexual impulses.

No recent movie showing the world of Japanese salary man can avoid depicting them as XXI century slaves and this one is not an exception. Here, the real state company in question is leaded by a military-type subordinate-harassing self-confidence-destroyer man who can’t stop shouting to a young Mikio: “Kokoro kara warae!” “Smile from your heart!”. What a paradox (the psychological term would be cognitive dissonance): even though the sellers are under a very malignant pressure, they must not only smile but also feel happy inside. It’s then when the spectator understands the role of idols as an escape from a stressing, tedious and strict world to a more playful, even childish existence, free from the responsibilities and problems of the adult life.

Two more aspects of Japanese society are implicit in the story: one of them is the concept of 義理 giri (social, family obligation), much stronger than in any other culture. When the mother dies, the young office worker must take care of a mentally handicapped お兄ちゃんoniichan (elder brother). Instead of leaving him in the hands of the social services, he deals with him after work at the cost of his own mental health and eventually his physical integrity. The other aspect is voyeurism lato sensu. Apart from the dark side that most Japanese men hide and some of my J female friends often tell me about, in this case is just the desire to know about other people’s lives, especially the sordid and covert nooks. As a society where most emotions are secret but latent and nobody talks openly about personal matters, the need to peep is represented by documentary director (an alter ego of Kazuya Shiraishi, the own movie director, still in his thirties?) who pays a high amount of money to film a mixture of AV (adult video) and reality show with the former 3 characters as protagonists.

This is a story about altruism and about the search for emotional attachment and commitment in a hostile society for the individual. If on the way to happiness your survival costs you a turquoise-blue ocean island in Ireland, it doesn’t really matter. Maybe that is the price to expurgate your past sins and start a new life as a “decent woman”.